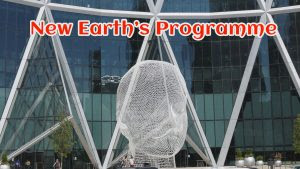 * * *
… Many beings, are NOT understanding this great event, since they see it, as a material manifestation, they are not understanding that the Universe – Antimatter, of LIGHT and LOVE, is not expressed with the smallness of the primary mind, nor with The shape of limited thoughts.

People who reject, criticize, write adverse articles to the “Awakening of Consciousness” are not understanding the functioning, and the global context, of the Universal Mind.

These beings, who do not understand cosmic events,
Said Brother Interano,
It is, because their minds, are still revolving around Planetary and Scientific Knowledge, which are part of the planet Earth.

They are beings, who need the Phenomenology, the Sightings, the UFO Manifestations, and, the Extrasensory Experiences, to be able to believe, or, to have verifications, that confirm their faith.

To understand what the Greater-Ayaplian Brothers want to convey to them, the soul of the Human Being must enter, and, be part of the degrees, and Spiritual planes of Universal Knowledge, Understanding and Love.

The being that “Awakens the Consciousness”, possesses within himself, another kind of appreciation of life, this is more profound, perceptible, and acute, since the soul will not only capture his life with the five external senses, but, that, the perception of himself, and of his surroundings, will do it with the seven (7) more senses that belong to the soul
Said Brother Elohim.

There are many people, who have not read THE BEING ONE books, do not know what it is, and, despite this, they make incomprehensible comments, which do not conform to this great cosmic event – Brother Seramita continued …

There are other people, who despair with the statement made by the Elder-Ayaplian Brothers about the 200-year delay, so that the Alignment is formed, and, another 7,000 years, which will last, these beings wonder
How will we know that all this is true, if we don’t
Can we see at that time?
Brothers, the time in Antimatter does not exist, we, your Elder Brothers-Ayaplians, have explained them to you this way, so that you can understand it.

Open your minds, and, try to understand it, from other angles, and, in different perspectives.

This great event can only be understood, when the Soul of the Being has awakened its Consciousness, and, Conceived its Spirit within its heart, and soul.

Prepare your material body, nourishing it properly, following the instructions we have given you.

Choose the healthiest foods for sustenance
Said Sister Interana.
Take care of the physical body, with love, and delicacy, matter will thank you.
You, nourish your souls, with thoughts full of LIGHT and
15
LOVE, read, listen to soft music, the astral body will compensate.

Do not let anything, or anyone, alter the Harmony, and Peace, of the Spirit.