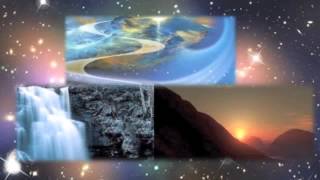 We arrived at the airport about an hour before sunset. The light was a bit dim, but we could still clearly see that we had indeed arrived at the modern airport. The building was completely transformed from the old fashioned one that we had once seen and now had sleek lines and large windows.

Most importantly, the sky was filled with Starships. The larger ones were “parked” high in the sky, the smaller ones closer to the earth, and there were several very large ships that were so high that they were distant shadows.

I wondered if maybe the dim light was playing tricks on my vision until a large scout ship buzzed over us and landed close by. Instantly, two tall blond beings in blue uniforms exited the ship and walked swiftly towards us.

Even though the light was dim, Sandy and I could quickly identify them as Mytre and Mytria. We started to walk towards them, then Sandy began to run. She ran to Mytria and hugged her. Mytria warmly returned her hug. Sandy then hugged Mytre, while I continued to walk towards them not sure if I could maintain my masculine aloofness.

“Oh, come on Jason,” said Sandy with a big smile. “You know you want to hug them too.”

Mytria made it easy for me by stepping forward to greet me with a big hug. Even Mytre hugged me saying that Pleiadian men were very openly affectionate. In fact, he asked me why I did not remember that fact. Was he telling me that I was a Pleiadian?

“Of course he is,” said Sandy responding to my thoughts again. “I guess that makes me a Pleiadian too. How cool is that?”

To our surprise and great joy Mytre and Mytria directed us to their scout ship so that we could go inside. I was taken aback when Mytre directed me to sit at the helm and began instructing, actually he used the work ‘reminding,’ me how to pilot this ship. I was even more astounded when I suddenly remembered just what to do.

Sandy was beaming with pride for me, but stayed away to not interfere with my moment. Mytre then stepped in between us and started reminding me about the navigation and communication systems. I felt myself slipping into the NOW. Once I had totally released time my mind burst forth with memories of my true life as a Pleiadian member of the Arcturian Starship Athena.

I had the amazing experience of perceiving myself in a multidimensional fashion. I was in the scout ship wearing a human vessel, on the Starship as my Pleiadian self, and recognized my self as a distinguished member of the Galactic Federation. I also had a strong sense of my human child self when I almost died while swimming in the nearby lake.

Suddenly I was only the child on the verge of drowning. The surface of the water was far above me, but I did not care. I was experiencing a wonderful moment of total peace and calmness. Then, just as I was about to lose consciousness I felt myself being beamed out of the water and onto a starship.

“What a great death,” I was thinking when I felt as if some one else slipped into my body. I heard the voice say, “I am not some one else. I am you in a higher frequency reality.”

My eyes flew open, but instead of being on a ship I was on the flat rock from which we often dove into the lake. Because of my multidimensional consciousness I could see two simultaneous versions of that event. One was being beamed onto the ship, and the other was that my older brother had seen what had happened, swam across the lake and pulled me toward the rock for his friend to pull me out of the water.

I remember how I was freezing and that it took a long time for them to make me cough and throw up the water. I then heard the ambulance that someone had called. I had spent a long time in the hospital as I became very sick after that incident. In fact, I was somewhat of an invalid for several years.

I could never do athletics as I easily “ran out of breath.” All my life I had looked at my “drowning” as the worst thing that could have happened. Now I realized that it was the best thing that had happened. If I had not been sick for so long I would never have read all those metaphysical and science fiction books.

Also, I likely would not have met my “invisible friend” who was with me until I became a teenager. Of course, I quickly forgot the higher dimensional component of Mytre beaming me onto the Ship and steeping into me. Now I realized that my invisible friend was actually my own higher self, Mytre.

No wonder I recognized Mytre, as he was the one who entered my body. But how could he be inside of me and also be in all the other places such as the Pleiades and the Arcturian Mothership?

“I will happily answer all your question,” said Mytre responding to my thoughts.

“Since you are me, I guess you can easily read my mind,” I said.

“It is not as simple as ‘I am you.’ It is more like ‘we are ONE.’ Do you understand what I mean?” asked Mytre. He was speaking telepathically, and I was hearing him perfectly.

“Yes, I think I understand what you mean, sort of. Do you mean that in a higher dimension you and I are ONE?”

“That is a good place to start.” He smiled as he patted me on the back. I could not remember ever being patted on the back in that manner. I could never be a jock because of my ill health, which pretty much recovered as an early adult. However, my experience had left me shy and insecure.

Only Sandy could look into my heart to see my true self. My older brother who saved my life was killed a few years later in a car crash, which made me believe that he somehow had to sacrifice his life to save mine.

“You will meet the one who was your brother on the Ship,” Mytre again responded to my thoughts.

At this point I could take no more and burst into tears. To see my brother alive! To know that he too was Pleiadian released a lifetime of guilt that I had taken his life away from him. Sandy rushed across the scout ship to embrace me, and I actually allowed her to comfort me.

In fact, I realized that that was the first time since my “drowning” that I had allowed any one to deeply comfort me. When my brother died, I was stoic and could never cry. Now I cried for all the years that I could not cry before.

After what seemed like forever, but was actually “beyond time,” I began to feel the same peace and calm that I did when I was dying, but now these feelings were because I was alive.

My experience was not as dramatic as Jason’s. Maybe that was because I was thinking about helping him more than thinking about what was really happening. Either way, by the time Jason had regained his center, I had fully adjusted to our situation. In fact, I wondered why I was so calm. It even felt normal, as if I had finally come home after a long journey.

Yes, that was it. This event was a homecoming for me. I had never felt at home in the physical plane. Fortunately I had my invisible friend who talked to me like I was an adult rather than a kid. My invisible friend woke me up when my nightly nightmares became too scary and taught me mind control as a teen so that I could control my thoughts even while asleep.

Most importantly, my invisible friend listened to me while I complained about my life. I did not have a family in which it was safe to be my real self. Therefore, I developed a “not me” persona so that I could communicate with the strangers that appeared to be my earth family. Then I would retire to my room, lie on my bed, look up to the ceiling and talk to my invisible friend.

“Do you mean the Arcturian?” said Mytria responding to my thoughts.

“What!” I said in shocked voice. “Was I talking to the Arcturian all that time?”

Suddenly, the small ship was filled with the familiar light and feel of my invisible friend. Instantly, I calmed down and allowed the light to embrace and comfort me. My invisible friend had returned.

I had been so distracted by falling in love with Jason and all of our great adventures that I had not even though of it. How could I desert my lifelong comforter?

“You never deserted me,” spoke the familiar voice of the Arcturian. “You just pulled me inside of our joined Oneness.”

Mytria responded to my shocked look by saying, “Yes, dear, that is the voice of the Arcturian. It is here with us now.”

Now it was my turn to cry, but my tears were those of joy rather than sadness. Mytria embraced me and said, “Yes, the Arcturian has always been OUR guide and comforter.”

“Yes,” Mytria and Mytre said in one voice. “Now that you have both merged with us, all four of us will merge with our joint higher expression, the Arcturian.”

Jason and I were startled by their comment, but we managed to accept their outstretched hands. Mytre and Mytria held hands while Jason took Mytria’s hand and I took Mytre’s hand. In this manner the four of us created a circle.

Jason and I had been told that we were all ONE, but NOW we could FEEL that Oneness. As soon as Jason and I relaxed into the overwhelming sensation of our joint energy, the Arcturian filled the center of our circle.

The feelings of euphoria, bliss and unconditional love filled our circle of light and penetrated deep into our core. Instantly, we felt ourselves being transported back to the core of Gaia. Before us were Laturnius and the Lemurians.

They had prepared a great celebration with wonderful music and delicious food. Everyone was beaming with joy and unconditional love.

“Welcome,” said Laturnius. “First we will celebrate, and then the Arcturian will prepare and guide us as we re-calibrate Gaia’s Core and Cornerstone Crystals!”

I think we are coming pretty close to the end of this series now. I am not sure though, as I am just the scribe. Of course in some ways every novel is the author’s autobiography because we place ourselves inside the story. Writing gives us a way to fulfill that which we cannot—yet—experience in our daily life.

I am feeling (maybe hoping) that the events in these Pleiadian books will happen. In fact, maybe they have already occurred, but I cannot remember. Or, maybe they are taking place in an alternate reality or a reality just a half octave up from this one. Likely, all of these options are correct, and they are all happening simultaneously within the ONE.